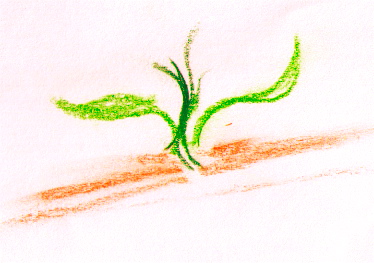 “Bonding is not an ego function, which is to say its outcome cannot be foreordained by planning or willing, nor can it be guaranteed. Rather, bonding is a Spirit function. It occurs when Spirit moves. (p.7)”

During Atira II I became a foster parent to an angry 8-year-old boy. I believed I knew what to do to bring the goodness out in him. He confronted my illusions about goodness. He was not about to let go of his fearful perception of the world and trade it for my nice version. I thought I could teach him about nice and that he would embrace niceness. This did not happen and I was confronted with his anger. I felt a need to control his aggression. I was confused and frightened by my need to control him, something I had labeled as bad.

In Atira II we developed expressive art experiments to try out in our community of Atira learners. I dealt with my confusion over my need to control my foster son through developing experiments, which “researched” people’s experience of control. I facilitated role-plays of what I believed to be negatively controlling situations. My co-learners responses did not fit my preconceived perceptions. Their responses were different than I expected. They experienced themselves. I could not contrive or fabricate my expectations. Each person was himself or herself in the moment.

Years later, now a parent for 8 years, I finally understand. What do I understand? That I cannot foreordain the outcome. I cannot play God. I cannot take on Spirit’s function. Not only with my children, but also in life.

I came to this understanding when I began to become aware of how I judged myself and see myself as flawed. I verbally beat myself up when I do something I think is bad or gets someone upset. I have a strong impulse to “do something” to fix the outcome of my misdeed. I do the same with my son. I want to change aspects of him, which I perceive as bad or hurtful. I do the Atira process to eliminate the bad aspects of myself, again foreordaining the outcome.

My teenaged foster son returned to my home after running away from a group home three years ago. I struggled with my own and other family members fear of the outcome should I let him return. As I sat quietly with myself, I realized that all I can do is to trust my own sense and that the outcome is irrelevant. I could offer myself and the rest is up to him. I saw that the reality of life changed him, not me.

The acceptance of the realization that I cannot control and am not responsible for outcome came slowly. First in /spring, preparing for a workshop, the words came to me: Your Love is enough. Then this summer at an Atira workshop, an image (31) given to me: I am lumpy. The summer seemed chaotic, with many events happening that caused me despair. I became afraid. Unlike the other times I was afraid, I kept it to myself. I held it. I did not attend it in the usual sense. I kept busy cleaning, sewing, and taking care of kids. I spent three days making a quilt, not thinking of anything and acceptance came—of my son and myself. I accepted my lumpiness. I accepted my son’s attitude. I accepted that my Love is enough. It is freeing. Not having to change anyone. Standing up for my truth without judgment or condemnation. As in bonding, its function is to “transform from what one conceives ones self to be to be who one is. (p.7)”